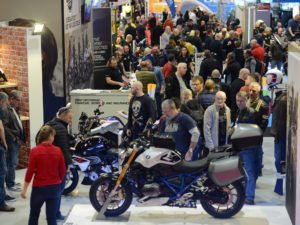 Three action-packed days of motorcycling have come to a close after a record breaking crowd of 39,811 flocked to London’s ExCeL Centre to celebrate the best of two wheels. With 22 manufacturers, biking celebs, rare exhibits and exclusive offers on gear, the 2017 Show was the biggest yet.

Jeff Turner, Marketing Manager at Yamaha Motor UK added, “We’ve had a continual stream of interested potential customers waiting to sit on our 24 bikes, many of them showcasing our accessory line-up. The level of knowledge shown by the visitors is impressive, with many people asking very specific questions about their model of interest. The new MT-10SP and YZF-R6 have been particularly popular and Valentino Rossi’s race bike has seen more selfies than you could shake a selfie stock at!”

There was plenty for race fans to see elsewhere too, with the Suzuki stand hosting a special Barry Sheene tribute, which alongside helmets and leathers featured four of the London hero’s machines – including his 1976 and 1977 title winning machines! MotoGP fans were treated to an explosion of noise on Saturday when Loris Capirossi’s, Carlos Checa’s and Casey Stoner’s Ducati Desmocedici’s were fired up.

Ross Walker, Marketing Co-ordinator at KTM said “It’s been a really strong, exciting show for us, starting with Britain’s only Dakar winner Sam Sunderland making his way through the London traffic to a great reception here at the Show. Our mix of on and off road bikes have had great interest and the timing is great, with 2017 models arriving in dealers. And for the real techies, the new MotoGP bike has attracted massive attention.”

Historic vehicle specialists, Coys, put a huge collection of rare motorcycles and memorabilia under the hammer whilst the fourth London Custom Bike Championship was held over the weekend, with bike builders from across Europe coming to the capital to compete for a prize purse of £10,500. With some stunning motorcycle on display, it was Paul Milbourn who came ‘best in show’ with his titanium Moto Guzzi machine.

Many exhibitors also praised the 2017 show with Rich Austin, owner of Austin Racing said “It’s been a fantastic show for us, easily the best by far and it feels like all the stands have made a big effort. We also got to start one of our bikes each day which was also shown on MCN which gave us massive exposure.”

Rob Aherne Managing Director of Motorcycling at Bauer Media said, “What an incredible show this year has been, and we’ve had more people through the door than ever before. The reaction from our visitors, exhibitors and stars has been amazing, with everyone enjoying the huge range of attractions on offer.”